For detailed information of the route, please download the Crab and Winkle Way leaflet. 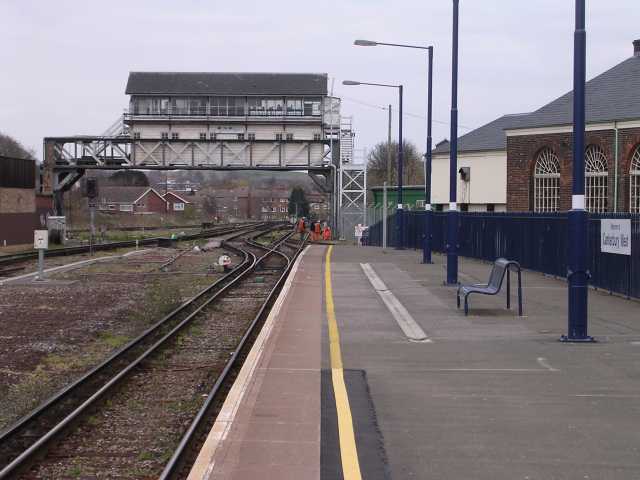 although they are at present being incorporated into a housing development (at least they are being preserved). After

being linked to the South Eastern Railway, Whitstable branch trains terminated in a bay platform which although now filled in, can still be seen behind the concrete fence panels on the northern end of the down platform at Canterbury West.

The branch diverged just beyond the existing gantry signal box, also a listed building which is still in use. The first 200 metres have been obliterated by housing development but the embankment alongside the playing fields at St. Stephen’s can be clearly traced together the remains of an infilled pedestrian tunnel now made redundant by the university cycle route.

The embankment is then severed by the subsequently constructed Beaconsfield Road and associated housing immediately to the north. The embankment continues to the grounds of the Archbishop’s School with the original footpath and crossing, with fences, joining St. Michael’s Road and Leycroft Close. 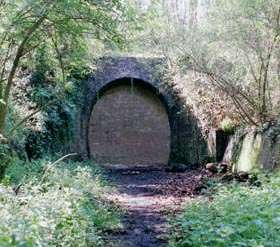 tunnel which has been bricked-up with a grill to provide access to storage space but no longer used as such. Part of the tunnel was damaged during construction of the university but some 150 meters from the southern portal are accessible and in good condition for a 170 year old structure. Some 4% of the 700 meter length was plugged with concrete as a result of the collapse with about 25% being filled with a loose mixture of ash and cement. The trust would like the tunnel to be designated as a listed building with a view to attracting funding for possible restoration. The northern portal has been bricked in.

From the tunnel to Clowes Wood

The line runs through countryside that is now in private hands or completely overgrown. We will soon lease over half a mile to the north of the tunnel, but the Halt bungalow and the woodland beyond are privately-owned. We hope in the future to secure public rights of way here so that walkers do not have to detour back onto the road.

The trackbed then continues on an embankment crossing the Sarre Penn Stream and then, still climbing, reaches the Tyler Hill to Blean road where Blean & Tyler Hill Halt was situated just north of the level crossing. The trackbed here forms the access to the residence named ‘The Halt’ which lies a little further to the north, next to the circular pond which supplied the Tyler Hill winding engine. Continuing towards Whitstable a short embankment crosses a narrow valley near Well Court with a small stream running through a tiny culvert which is still in remarkably good condition.

This is the middle of the line. The pond itself was built in 1829 to store the water that the steam winding engines needed to pull the passenger

carriages up out ofWhitstable.The area was restored in 1999 and is now the scene of family picnics and a rest for others. It’s also where members of the Crab and Winkle Line Trust meet on our anniversary ride each May.

The crossing gate posts at Well Court remain and the trackbed continues into Clowes Wood as a well-used footpath and cycle track curving slightly to the right as it passes the storage pond for the second winding engine.

The area around the pond has been provided with seating as part of the Canterbury to Whitstable cycle route opened in 1999 and provides a convenient resting place for travellers in beautiful wooded surroundings. But, beware the mosquitoes in the spring and summer!

Here we’re back on track. Much of the line has been reopened as part of the cycle path, although some of the original line is a little to the west. It was here that the Invicta ran, taking people down into Whitstable and back again.

The route continues on a falling gradient to the northern edge of the wood where the cycle track diverges, leaving an isolated section of embankment which stops short of the new Thanet Way (A299). However, this embankment offers a real reward to the railway explorer for amongst the undergrowth remains a brick-built bridge which allowed access between fields on either side of the railway. The parapets which now lie on the ground beneath appear to be of triangular design.

A ploughed field adjacent to Brooklands Farm obliterates the line of the track until South Street is reached where the trackbed emerges from behind houses at Millstrood Road.

The original line ran behind the houses here. South Street has no pavements, and is the only

on-road part of the line, and still dangerous for walkers and cyclists. The Trust is working with local businesses and the Council to get this important section of the line safely off-road.

The cycle path here follows the original route, and off-road. The Invicta Way follows the trackbed beneath the 1930s art-deco grandeur of the Southern Railway bridge carrying the old Thanet Way across the railway.

South Street Halt was located immediately to the north at the beginning of what is now the foot- and cycle-path known as Invicta Way. (See map). The pathway diverts into All Saints’ Close before the embankment ends at the point where the old brick bridge, demolished in 1969, crossed The Bridge Approach which runs alongside the main line between Whitstable and Herne Bay. This was traversed by a girder bridge, the northern abutment of which still remains against the short embankment on which was situated Tankerton Halt, directly accessible from the main line platforms. Another girder bridge then crossed Teynham Road and the abutments for this still remain.

The oldest passenger railway bridge in the world was here. It carried the Crab and Winkle Line over what is now two roads and the London to Margate railway built in 1843. Sadly, the bridge was knocked down, but bits remain. We’ve already stopped many planning applications to build on this land. And we’re hopeful that we’ll be able to close this gap with a graceful new bridge. It would get local people and visitors from the heart of Whitstable into the countryside beyond without touching a road, or going uphill.

The line of the overgrown embankment can still be traced alongside back gardens in Clare Road with original fencing still evident. Several industrial premises still mark the line of the track as the falling gradient continues close to Station Road. Curving westwards all trace of Whitstable Harbour station is lost beneath the new buildings which have appeared since the 1960′s. The line then crossed Tower Parade into the harbour area

No trace remains of the Crab & Winkle railway in the Whitstable Harbour area apart from a pair of wrought iron gates in the perimeter fence with the ‘SECR’ logo in the centre of each. This dates these at the turn of the century when the SER and the LC&DR amalgamated.

The trains ran along the south and east quays where ships moor to this day and where restaurants commemorate the historic line. Here we’re working with the Council and with focal people to make sure that any development of the harbour takes full account of, its special shared history with the Crab and Winkle Line.